It was a Tuesday that started like an other Tuesday. I taught my early class and went for a 3.5 mile recovery run which felt pretty good. By 11AM though, I was on the couch napping. At first, I chalked it up to the fact that I’d just run a marathon and then spent the following day traveling back to DC. At 2PM, it was clear that I was not just tired … I was sick.

When I woke up on Wednesday, I had no voice and the way my throat felt led me to strongly suspect that I had strep. Later that day, I was in the doctor’s office being tested for both strep and the flu. Both came back negative. I was looking at a really bad cold and the clock to get better was ticking — 11 more days to my next marathon.

I employed every home remedy I could and subbed out all of my classes for the week so that I could just lay on the couch and rest. I could barely get off the couch until Sunday morning — 7 days to the race. All of the week leading up MCM, I was struggling with the lingering effects of this cold — a ton of coughing and nasal congestion. My lungs were tired. My two test runs during the week felt great in my legs but not so great in my lungs.

It’s not the way you want to start a marathon. Having my legs not be 100% is one thing, but having my lungs not be 100% was something else entirely. I knew I could run the race but the question was at what point would my lungs start to complain.

Race morning though, I felt pretty good. I was feeling ready after having rested the previous two days. When the race started, I told myself to run the best race I could and I believe that’s exactly what I did.

Elevation wise, the first few miles of this course are the toughest … well, that and the insane uphill finish (but we’ll get to that in a minute). The miles seemed to fly by and when I cleared the Blue Mile and hit the halfway point I was averaging 9:49 per mile. Not too shabby for this tough course. It felt like a sustainable pace too … until I needed to stop for a bathroom break at mile 16. It was tough to get my legs going again and I’d lost a little speed. But still managing to average 10:03 per mile as I crossed the 30K mark.

Then came the bridge — more than a mile of what felt like a desert. Temps had climbed significantly and out there we were completely exposed to sun, no breeze, and very little spectator support. On the other side of the bridge, the race started to get a little rough for me.

My inability to breathe like a normal human being had caught up with me. At mile 21, the coughing started — a dry, barking kind of cough that made my lungs want to scream. I was coughing so much by mile 22 that I thought I might throw up all the GU and Gatorade I’d been taking in. I mean, my stomach is already pretty squirrelly by that point in the race already. I’d only ever thrown up on a race course once before and I wasn’t interested in doing that again anytime soon. With visions of how tough the final miles of this race would be under these circumstances, I continued on through Crystal City.

Just then I looked up and saw my friend Gina. I didn’t stop though, I was coughing so much I think I just wasn’t thinking straight. But luckily it was a point in the course where we double back and pass again. She jumped to the other side of the course and was able to catch me again at mile 23. This time, I stopped. If for no other reason than to let my lungs have a break. And there were hugs. Hugs on marathon courses are like blood transfusions — they can literally bring you back to life. 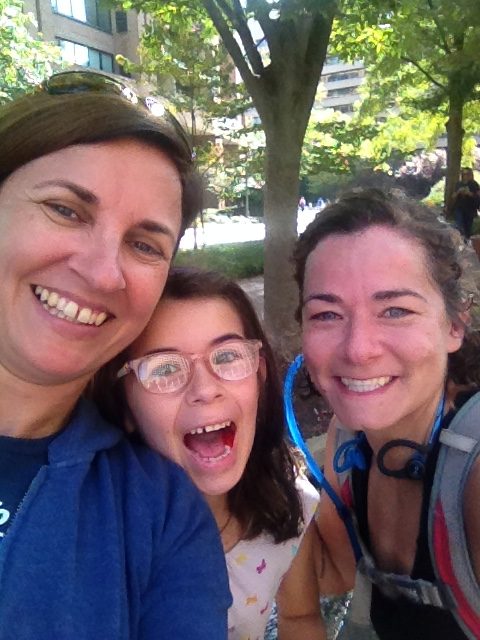 In between hugs, Gina’s daughter Julietta was offering me Haribo gummy bears — a great marathon spectator in training. Another hug and I was off. Just over 3 miles to go — coughing and baking in the sun.

As we passed the Pentagon, the coughing eased a little and I was able to start moving at a consistent pace again. It was a slower pace than what I started with but this late in the race, it’s more important than ever that you just keep moving forward. I was also mentally preparing myself for the steep climb to the finish.

Once I hit the mile 26 marker, it’s a sharp left turn and a big climb to the Marine Corps War Memorial. If it wasn’t for the bleachers of spectators and the Marines giving high fives and shouting encouragement, I don’t know how anyone would get up that hill. It feels like you’re so close and yet still so far away. Over the years, I’ve learned the smartest thing to do is just charge that damn hill with everything you’ve got.

But before I knew it, I was across the line and it was over.

“The path to heaven runs through miles of clouded hell” — that quote pretty much sums this one up. It certainly wasn’t my prettiest marathon performance but Marathon #17 is complete and I’m more than satisfied with a 4:37 finish — only 12 minutes slower than Chicago two weeks earlier, despite all the extra challenges I had to contend with this time around.

This was my fourth time running this race and every year somehow I manage to forget how brutal this course is before I sign up again. Every year, mid-race, I question why I continue to do it; I tell myself this is the last time I run on this course and yet every year I register again. I’ve learned that the tough logistics and challenging course still aren’t enough to keep me from coming back here. There’s just something about this race that overrides it all.

I tear up every damn time I cross that finish line and again when a Marine puts the medal around my neck and salutes me. In spite of everything, this race is magical AF. And I will gladly endure 26.2 miles of hell to experience that moment all over again.