A few months back, my friend, Sunday Runday buddy, and former “not a runner” Sam announced that 2018 would be the year that she ran her first half-marathon. Now, I’m always a sucker for watching newbs tackle their first race distance so as soon as she picked the half she was gonna run, I immediately announced that I was gonna run with her. Plus, it helped that she picked a race I actually really like — the Parks Half Marathon.

So Sam has been steadily taking the mileage up every Sunday. And since I’m technically supposed to be training to run the Grand Canyon from Rim to Rim this October, I’m right there with her ramping up the mileage … or at least I should be.

Two weeks ago, I brought up the idea of running the Rosaryville Trail 10-Miler to Sam as a training run. Part of me thought she’d immediately shoot the idea down and need to be heavily peer pressured into doing it. But to my surprise she said she’d be up for it.

This wasn’t our first rodeo on this course so we pretty much knew what we’d be getting into. Last year, we did two events here — a 15k and 25k for me and a 5k and 10k for Sam. And if you had told her last year that this year she’d be back to run for two straight hours she would have most definitely laughed her face off at you.

Fast forward to today, we met at 5:30AM to head to the race. Thanks to the torrential downpours all day yesterday, the trails were muddy and a bit slick but not nearly as bad as I expected though given the volume of rain that fell. And the temperatures were amazing — like 63 degrees with cool breeze amazing. For July in DC, you really can’t get much better than that.

So clearly navigation is not our strongest suit and we arrived at the event site with only about 15 minutes to hit the bathroom, grab our race bibs, and get ready to launch. But fortunately for us, we weren’t the only ones struggling and the race officials delayed the start a bit to let all the runners get through the bathroom and bib pick-up lines. After a quick pre-race briefing, it was time to line up — all distances (10k, 10m, 25k, and 50k) started together.

The first 3/4 mile of the course is pavement before cutting into the woods and onto the trail. About 1.5 miles in, we had settled into a good relaxed pace with a chain of dudes behind us who periodically commented on how they really liked the pace I was leading. They stayed with us until we hit the first aid station at Mile 5. But before we peeled off, one of these dudes schooled us about the odd cucumber smell we caught a whiff of periodically out there.

So did you know that cucumber smells in the woods are indicative of a nearby Copperhead snake? Or are we the only ones who’ve never heard this before? Needless to say, we were smelling cucumber and high-stepping through a few stretches throughout the race. It was cool though, no actual Copperhead sightings and it really added to the mystery and suspense of the day 😉

I was also pleasantly surprised to see that the weird collection of miscellaneous and totally random weird shit — like a creepy baby doll, a bicycle, and a toaster — were all still sitting along the side of the trail just before Mile 3. Last year, this gave Chris (my running companion for the 25k) and me some chuckles and a fair amount of the heebie jeebies when we passed by it twice. Super strange. 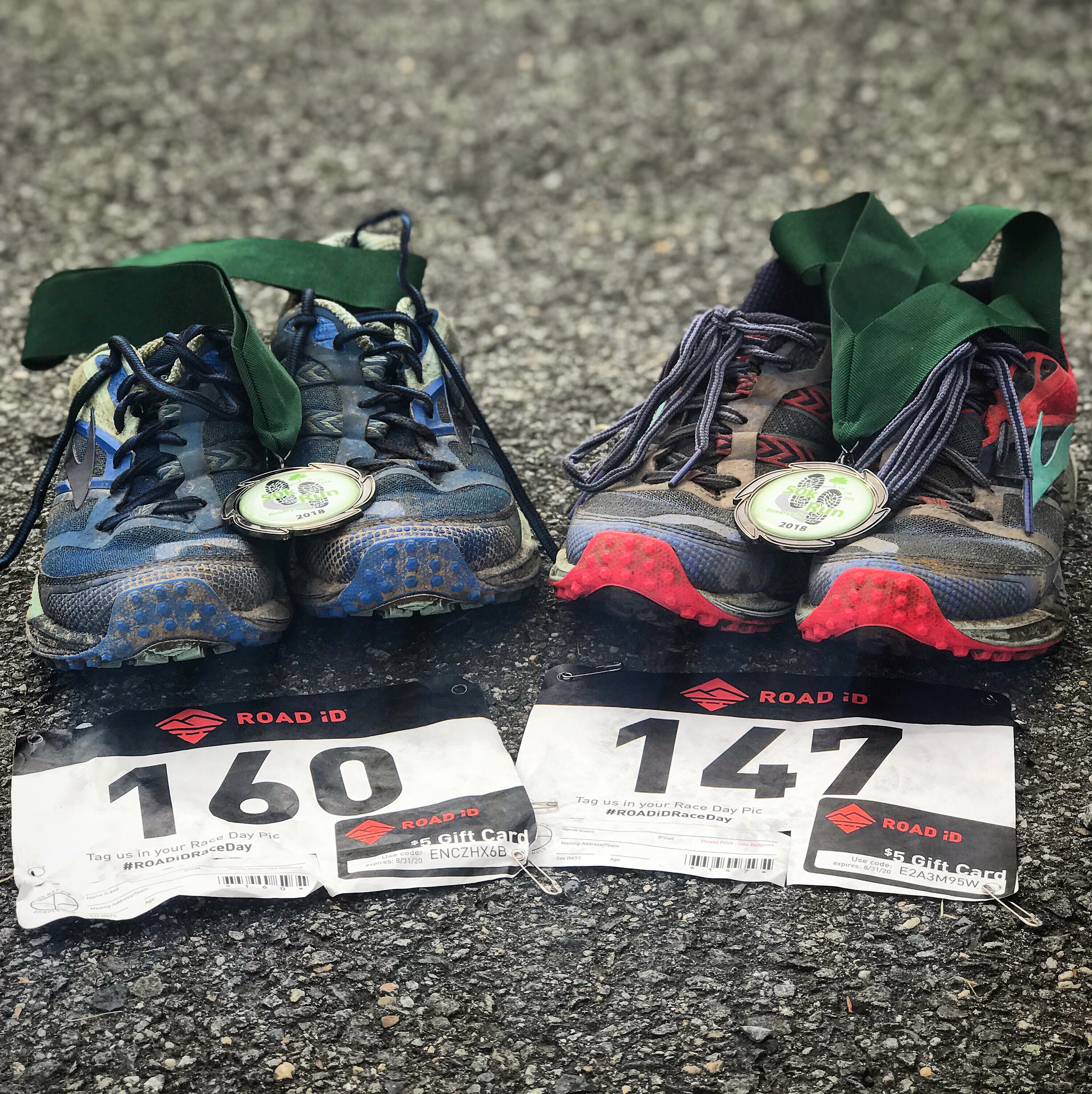 The course was great, just as I remember it. Lots of rolling hills, a few easy stream crossings, and only one real steep/tough climb. The trails were well-maintained, super shady, and mildly technical through some stretches but otherwise smooth and mostly single track. Totally doable for trail newbies.

We finished strong, smiling, and in excellent time with a pace that was consistent with recent trail training run paces.

But the highlight of the day was definitely that moment when – with less than a mile left – Sam finally let it rip … “You know, I love you but I really sort of hate you”.

And as you can imagine, it was music to my ears 🙂