At the beginning of the year, I was approached about assembling an obstacle race team for Savage Race Mid-Atlantic, an intense 5-7 mile muddy obstacle course.  Admittedly, it didn’t take much to convince me to form the team and before I knew it, our team had begun to grow.  I was pumped about the number of first time obstacle racers who were eager to sign up; obstacle racing is intimidating for newbies and often it takes A LOT of convincing to get people to sign up. A few of the athletes wanted assurances that I was confident they could complete the race, but most accepted the challenge with enthusiasm.

A few months out from the race, I was asked to develop a training program for the athletes on the team. I was already doing an obstacle race training session once a week as part of goRun (the running club I launched in March) but my Savage Team was requesting a special session on Sunday mornings that would be a more advanced version of the Tuesday session. I was still very new to the world of fitness training- I’d never done anything like it before- but I was in love with the idea of it.  I’ve done my fair share of obstacle races and I’d always trained myself so I thought it would be fun to train an entire team.

So, the Sunday Savage training sessions were, well…brutal. Some days, while watching my team carry sandbags, flip tires, swing sledgehammers, and run 400m laps around the building, I would think to myself “wow, I wouldn’t want to do this workout.” But this crew showed up every Sunday and took whatever madness I dished out.  Truly impressive!!

A few weeks out from the race, Emily, one of the athletes I coach who just started running in January during my beginner’s 5K program, decide to join. She was a little behind the eight ball since the rest of the team had been training for weeks now but she wasn’t deterred.  She held her own during the workouts but she only got to participate in a couple of them so I was a little concerned about whether she would be mentally prepared to tackle what would be a difficult course.

On race day, five of us piled into The Savage Mobile (aka Drew’s Jeep) in the wee hours of the morning and headed to the course which was about a 2.5 hour drive.  The drive there was hilarious- great conversation, a coffee stop, and MANY bathroom stops (you learn a lot about people when you race with them, apparently half our team has “nervous bladder” syndrome). The rest of our team met us at the race site.  We picked up our packets and got some pre-race photos.

There was a ton of nervous energy among the team members. As we stood at the start line waiting for our wave to start, the newbies’ anticipation had reached fever pitch. When the gun went off, our team took to the course like a stampede, equal parts excitement and fear. Prior to the race there was much discussion about which obstacle each person dreaded/feared the most; many citing the shock wires, high platform jump, and sawtooth monkey bars.  I, however, knew better.  By far, the worst obstacle on the course would be the dumpster full of ice water. 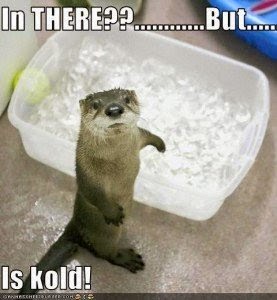 Now, I know what you’re thinking. It’s just ice water, how bad could it be. VERY BAD!! And guess which obstacle was first on the course…yeah. Perhaps it was better that the rest of my team didn’t know what to expect on this one. They were so distracted by fear of later obstacles that they didn’t see it coming…

Halfway across the dumpster, there was a 2″x8″ board which forced every competitor under the water. When you came out on the other side, it felt like your chest was being crushed and to make it all even more fun, you very quickly realize that your nervous system is in complete shock and the signals traveling from your brain that tell your arms and legs to move are not being received by your muscles; but wait…there’s more- every person in front of you is experiencing the exact same thing, rendering them practically physically incapable of getting out of the dumpster. And then there’s you, stuck treading water in a dumpster full of ice, no way out, body not cooperating, in a terrified panic-stricken state.  Sorta like this…

Even when you do manage to get out of the dumpster (and, don’t worry, we all eventually did), your skin stings and every muscle in your body is frozen solid. So, yeah, kinda difficult to run.  Of course, the next half-mile after the dumpster was the only shady part of the course…

Given that I was injured and wasn’t able to train, I was pretty impressed with my own performance on the course.  This was, after all, the first race of the year for me. I found Savage Race to be the most enjoyable obstacle race I’ve ever done; it was a fabulous mix of mental and physical challenges.Most notably, I was proud of myself for completing the Sawtooth Bars (no, I did NOT use my legs…I’m not a cheater).  This was something I’d never guessed I could do.  When I got across, I had to fight back the tears (captains don’t cry). A close second, was getting up Colossus with no assistance.
Even earning myself a spot in Savage Race history on a promotional shot.
Overall, I have to say that I was very impressed with the entire team; however, one stood out above everyone else, Emily.

The most remarkable things about that day- the two things that I’ll remember above all else (including my own personal, previously-unimaginable, achievements)- is Emily and her endless bravery. It was no secret that Emily was not as fast or as strong as the rest of the team members (remember she JUST started running and she missed weeks of training for this race) but what she lacked in speed, strength, and overall preparation, she more than made up for in courage. It couldn’t have been easy for Emily to be running behind the team for the second half of the course or knowing that they’d prepared 10 times as long as she had. These factors would have worn on most athletes, systematically tearing them down with every step they took…but not Emily. Nothing seemed to get into her head. She had no business thinking she could do this… 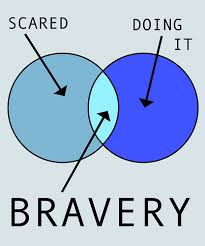 But you know what? She did it anyway. One word: BRAVERY. Now, I’m not suggesting that she was fearless, far from it, in fact. Bravery is not the absence of fear; it’s having fear and acting in spite of it. I’ve heard it said “Superman is not brave. You can’t be brave when you’re indestructible. It’s every day people like you and me that are brave, knowing we could easily be defeated, but still continue forward.” Emily is a very smart young woman, she knows she could fail. But she did it anyway and that’s a very rare quality, one I admire more than athletic ability, or strength, or speed. Athletes can be trained to be strong and fast but bravery comes only from within the athlete and it usually can’t be coached out of them. This one quality is more valuable than any physical ability because you can be the strongest and fastest person on the team and it means absolutely nothing if you are driven by fear and doubt.

Emily was my takeaway from Savage Race and I wasn’t the only one who thought so. I will remember that day for as long as I live and I hope that one day I can be as brave as Emily.

Congratulations Team goSavage!! It was a pleasure to train you and race beside you.

Special thanks to Josue for boosting me over that 8 foot wall!!