It’s literally been years since the last time I ran a 10k race. Having spent most of the past few years focused on marathons and ultras, I simply didn’t have the time (or the funds) to spend doing these shorter races. But there was a time, not all that long ago, where the 10k was my favorite distance  — the perfect combination of distance and speed.

So this Summer, I decided to spend some time working these shorter trail distances — a great way to prep for Ragnar Trail Applachians in August. I’m on regular 8-person team this year (instead of last year’s 4-person Ultra team which was an awesome experience – read about it here) so the distances of each leg range from 5k to 10k (ish). Why not spend some time racing those distances so my body remembers what it feel like to go shorter and faster? 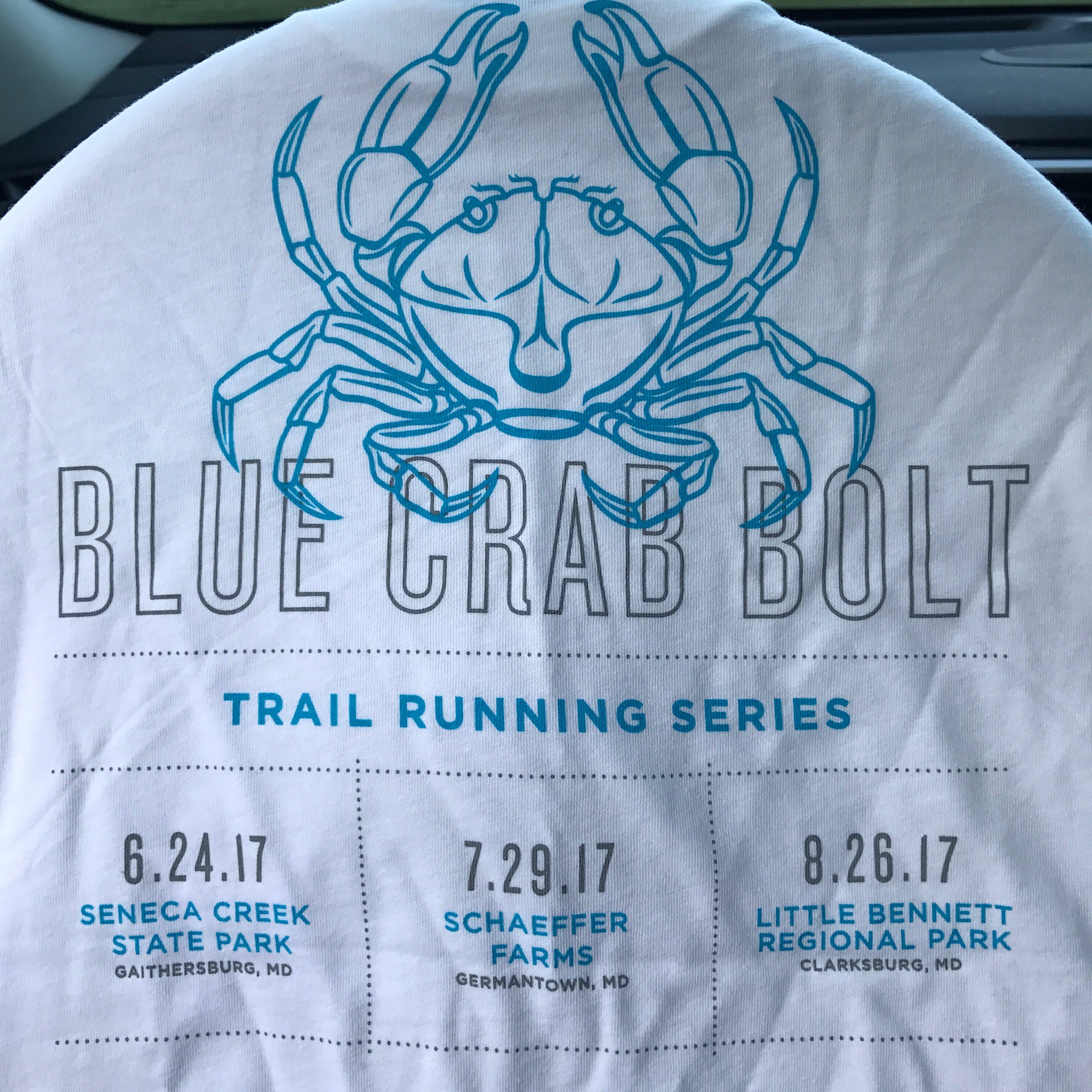 There’s a great three-part trail running series in my area called the Blue Crab Bolt Trail Running Series that’s put on by EX2 Adventures. Each event of the series features a 5k and a 10k. I’ve never completed the full series but I have run one of the 10k races before (2012, I think). Sadly, I won’t be able to complete the full series again this year — other commitments on those race days, including my upcoming yoga retreat — but that didn’t stop me from running the first race of the series, the Seneca Creek event. And returning to my roots, I chose the 10k option.

I arrived early for packet-pickup — one of the great things about running small, local races … less fuss. Then, I took a few minutes to scope out the course map and elevation profile to mentally prep myself for what was about to happen. I recognized the lake loop in the final 2 miles … but more on that later. 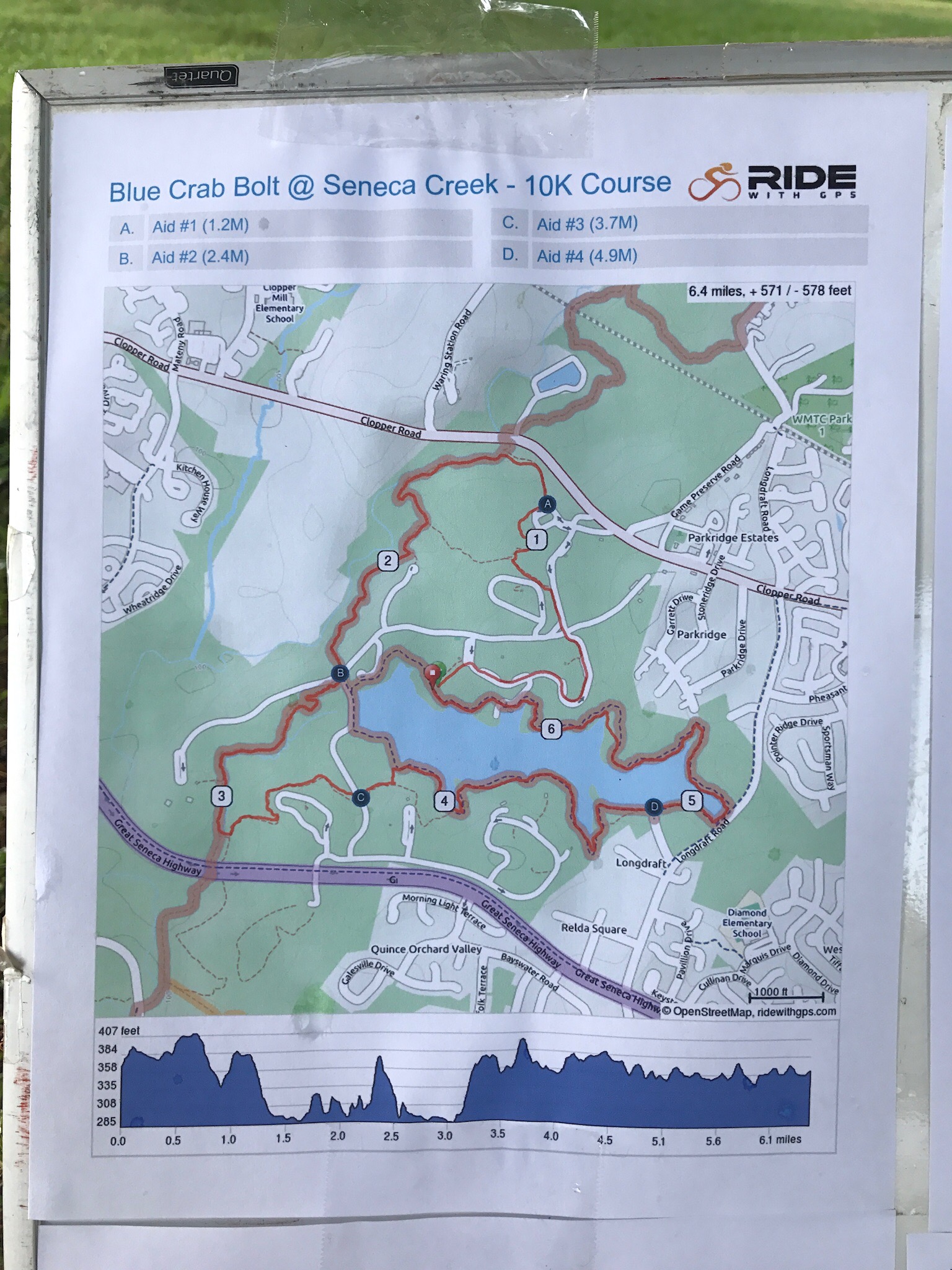 It was a small field with a simultaneous 5k/10k start although we actually split off from each other pretty early. The first 2 miles were well-populated and we were running in a chain at a pretty quick pace upon hitting the single-track trail about .75 miles in.

By Mile 2, the pack had started to thin out and I’d worked myself into a pocket where it was just me for longer and longer stretches. There were two big climbs in that mile, particularly right after Mile 3. From there, the course became mostly rolling hills so I was able to dial into a cruise pace.

Then came Mile 4 and the beginning of the Clopper Lake loop. The last time I ran this loop, it was March of 2016 during the final miles of the Seneca Creek Greenway Tail 50k — one of the toughest ultras I’d run. From Miles 26 – 33, I was dealing with a nosebleed brought on by the cold, dry air. That was quite the experience (read my recap here). I remember very vividly the loop that day, it was a big struggle. Every step around the lake of this 10k was a memory of that day last March. Eventually, I reached the spot where my stomach became so upset that I threw up (from swallowing blood) and all I could do was laugh. At least I knew I was close to the finish of this race.

The final mile felt strong and I managed a good solid push at the end — all those long races trained me well to hold a little in the tank for that final stretch.

All in all, it was a great race. Even the weather cooperated — very little humidity at the start, sunny but mild. Can’t ask for much better in late-June in the Metro DC area. I’m sure we had the overnight rain to thank for that. But even so, it wasn’t very muddy out there, just a few puddles here and there. Just enough water out there to make the wooden bridges very slick.

As with many small races, it wasn’t chip-timed but my GPS watch clocked me at 1:10:28 —- which was good enough to finish in the top quarter of my age group … not too bad considering my total lack of consistent training lately. (Note to self: start Chicago and MCM marathon training asap.)

One thing was perfectly clear though, I’m obviously not used to running shorter races like this anymore. Maybe it’s time to revisit these distances. On that note…